We might be the British Hen Welfare Trust, but our message that pet hens matter has been spreading its wings far and wide recently. Keep reading to find out more about what we’re doing to help hens in different countries around the world…

In 2020, we affiliated with a new French charity, Champs Libres aux Poules (CLaP) to help improve hen welfare in a country that is currently the EU’s largest egg producer. CLaP (which translates as Free Fields for Chickens) is based in Gers and aims to improve hen welfare in the commercial egg laying sector and find pet homes for hens that would otherwise have gone to slaughter. CLaP has already saved thousands of hens from slaughter by rolling out a similar rehoming programme to that of the BHWT.

The charity was set up by Heidi Carneau who first learned of the BHWT when she moved to the British countryside and adopted hens from the trust. Heidi went on to become an ardent supporter and fundraiser for the charity and after moving back to France, which still allows old-style battery farms to operate in flocks of less than 350 birds, she quickly established CLaP. 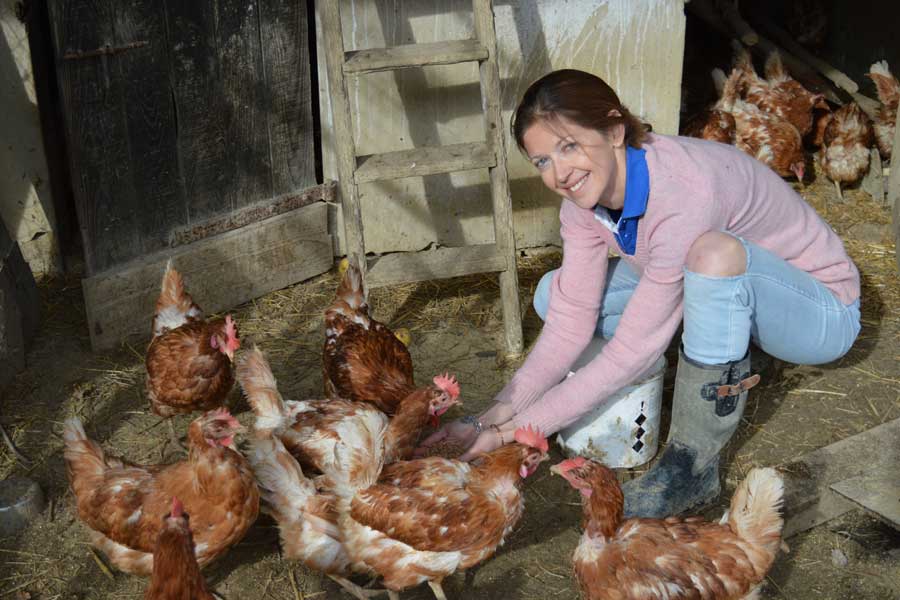 Heidi says, “After we moved to France, I located a caged farm just two miles away; when I was given the opportunity to take some hens, I reached out to Jane Howorth, founder of the BHWT, for advice. Jane and I then explored the idea of working together and the charity was born.”
Jane is now a board member of CLaP and as an affiliate partner of the BHWT has allowed them to use similar branding to its own.
Jane said, “I’ve known Heidi for several years so when the opportunity arose to work together in France with a similar objective and positive ethos, it was a question of when not if it happened. This new affiliate charity is a very exciting opportunity for all of us concerned with hen welfare.”

Heidi added, “The British Hen Welfare Trust has provided me with expert support and advice. Our goals and messages are closely aligned, and I am very proud to be continuing Jane’s work in France.”

We welcomed a journalist from Finland’s biggest newspaper, Helsingin Sanomat, to one of our rehoming days in Milton Keynes. Along with a photographer, she was able to capture the magic of a rehoming day and share it in a double page spread in the paper and on their website. There’s no commercial hen rehoming programme in Finland, so hopefully this piece will help to raise awareness of what is being achieved elsewhere and maybe even spark someone’s imagination to set up something similar. Read the full article here.

In September, our founder Jane Howorth and Ben Garrod, who has created a community coop with rehomed girls from the BHWT (read more in Chicken & Egg issue 28 page 22), were interviewed by a journalist from a global TV news agency. Feature News created a visual package about the BHWT and the benefits of adopting ex-commercial hens as pets which was screened on TV channels as far as China and America, helping us to reach new audiences and spread the word about how enriching keeping pet hens can be.
Watch the video here.

New Delhi might be over 4,500 miles away from Hampshire, but that didn’t stop an Indian website sharing news of one of our rehoming dates in Rowlands Castle, Hampshire. While we’re sure no one made such an epic journey to adopt some of our hens (although they’re more than worth the trip), it’s still great to be raising awareness of the BHWT on another continent.
Read the full article here.

When the pandemic hit, one of our wonderful education volunteers, Lizzie Gatherer, began delivering her chicken workshops online to groups such as Scouts and Cubs. Lizzie, and her hens, not only appeared on screens around the UK but as far afield as South America with Oman next on the list! When Lizzie is not delivering workshops, she is still busy helping hens through her work as a poorly carer volunteer and raising vital funds with a sponsored wing walk (read more in Chicken & Egg issue 28 page 19). There seems nothing Lizzie won’t do to help our hens!

We’re collaborating with the Environment & Animal Society of Taiwan (EAST), to help them raise awareness of the plight of commercial hens in a country where around 85% of laying hens are still confined to barren battery cages. An op-ed by Jane on the issue has already been featured on a Taiwanese news site, with more potentially to follow.

Jonathon Tree, a campaigner with EAST, told us more about the way in which hens are treated in Taiwan and why they approached us to help. He said, “Approximately 85% of laying hens in Taiwan are still confined to barren battery cages. The suffering of these birds is exacerbated by the widespread lack of temperature control in Taiwan’s hot and humid summers, and the appalling practice of forced moulting (which sees hens deprived of food for up to two weeks to stimulate egg production).

“We came across an article that described the journey of a hen re-homed by the British Hen Welfare Trust, and the mission of the Trust. We were inspired by the enormity of the endeavour – providing new homes to hundreds of thousands of hens – and the way it is fundamentally re-shaping how people think about chickens in the UK.” And whilst Jonathon tells us that Taiwan has come a long way in terms of awareness of companion animals – the president is famously a cat devotee – many are still learning about the plight animals face in intensive farming, research, and other areas.

Jonathon said, “When it comes to chickens, we believe that all hens should have the opportunity to fulfil their natural behaviours. Our first goal is to free all hens from cages and achieve a ban on the use of battery cages in Taiwan. The shoots of change are evident, whether it be the items sold on supermarket shelves or the receptiveness of farmers to talk with us about animal welfare issues. Several major retailers have committed to end their sales of cage eggs by 2025, and consumers are increasingly looking for products that meet certain animal welfare standards. We are on the right track. More and more consumers are aware of how their eggs are produced and making kinder choices at the checkout.”
Read the full article here.

We’re proud that hen enthusiasts from far and wide flock to the BHWT for advice, support, and information to help keep their pet hens healthy and happy.

Alongside our wonderful ‘home grown’ supporters in the UK, our Hen Health webpages have been viewed from countries on almost every continent including Argentina, Pakistan, Spain, Australia, and Canada. Whilst our magazine Chicken & Egg and eNewsletter Fresh Laid News have been read by people in the USA, France, Germany, Belgium, and Romania.

We’ve also helped a hen in an African village via our Hen Helpline and one of our Sponsor a Hens has been adopted by someone in New York City. We’d like to thank all of our brilliant supporters wherever you are in the world, together we’re helping to change the lives of hens everywhere.