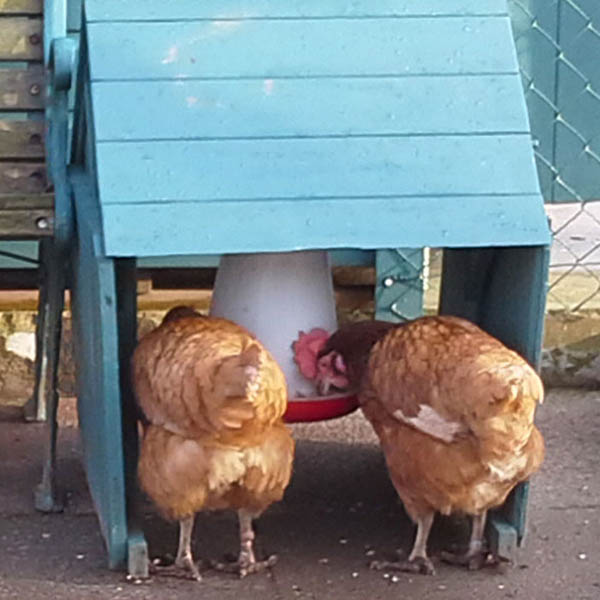 For the first few weeks in order to help the hens settle, it is useful to place down several feed and water points in order to ensure all birds get access and low ranking hens are not kept away by more dominant birds.  We highly recommend Smallholder Range Natural Free Range Layers Crumble and Natural Free Range Layers Pellets, both of which are available in our online shop. This feed is unique in being GM free, and it’s good to know what your hens are eating, especially when you enjoy their eggs. Both Smallholder Range Layers Crumble and Pellets can be fed to all poultry and provides all the nutrients your hens need. All commercial hens will have been fed a dry mash throughout their lives, so the Crumble is the perfect feed as they start their free range future.

It is fine to feed a small amount of mixed corn in the afternoon, although this is not essential as the Smallholder Range Crumble and Pellets range provide a fully balanced diet.

We only endorse products we consider good for your birds, but if you need further incentive to purchase The Smallholder Range, they kindly support our work by making regular donations to the charity, which we then put towards helping more hens.

When new to hen keeping, the array of hen feeders available can be bewildering; your final selection will be down to budget and personal taste.  Feeding hens isn’t just throwing some corn outside the coop, no matter what the old movies show!

An average size adult hen will need 100-120 grams of feed every day and you can feed a rationed amount every day, or choose a feeder than is large enough to last several days. Ideally choose a chicken feeder with a capacity of at least a 2.5kg capacity which will prevent it being knocked over as the hens run around. Smaller feeders are more suited to chicks.  If you intend to leave your feeder in an exposed run choose one with a cover to protect the feed from rain and discourage wild birds stealing the feed.

If the feeder will be used outside then choose one of our water proof chicken feeders with a rainshield. Our treadle chicken feeders help prevent waste caused by wild birds and vermin.

If your ground is uneven you might prefer a feeder on raised legs. The funky design chicken feeder from Feathers & Beaky is a new product in our shop and has an anti-tip design to help prevent wastage along with adjustable height legs making this the ultimate chicken feeder. All Feathers & Beaky products are designed to make keeping free range chickens even easier, and are tested on their own rescued hens.

Other things to consider are your flock size and available coop space.  It is also worth providing more than one feeding point so that the dominant hen cannot guard the food (as she can’t be in more than one place at a time).  Just take a look at our shop for a wide selection of feeders as all profits from the shop go directly towards helping to fund the re-homing of thousands of hens each year.

It is essential that hens are given a constant source of clean drinking water to help them to keep fully hydrated.  When new to hen keeping, the array of hen drinkers available can be bewildering; your final selection will be down to budget and personal taste. It is worth thinking about choosing a drinker that is easy to clean as it is important that the water is kept clean and fresh.  Easy fill plastic drinkers, such as this Feathers & Beaky Drinker,  or hard wearing tough galvanised metal drinkers are ideal but do remember that you shouldn’t use a galvanised product if you intend to add Apple Cider Vinegar to the drinking water. Other things to consider are your flock size and available coop space.  It is also worth providing more than one drinking point so that the dominant hen cannot guard the water (as she can’t be in more than one place at a time).  Just take a look at our shop for a wide selection of drinkers as all profits from the shop go directly towards helping to fund the re-homing of thousands of hens each year.

We know that everyone likes to give their hens treats, however, remember that hens can suffer from obesity too!  We recommend that no more than 1 dessert spoonful out of your hen’s daily food allowance should be treats. We advise sticking to good quality hen specific products such as Natures Grub, Feathers & Beaky or Feldy.

Nature’s Grub provide a range of treats including pecker blocks, hen herbs and treat mixes. They even sell flavoured popcorn for hens! Similarly, Feathers & Beaky have a range of pecking blocks flavoured with fruit or garlic, plus fresh nest herbs and a superfood mix. Feldy Pecker Blocks offer a delicious alternative for your hens – ours loved them! Find all the above on our shop.

Feeding your hens kitchen scraps is illegal (yes, really) so please bear this in mind. Following the Foot and Mouth outbreak in 2001 which was caused by cross species feeding, stricter regulations were brought in. Kitchen leftovers are only permissible from a totally vegan household.

Hens are not waste disposal units and should not be fed bread (which can ferment in the crop causing sour crop) nor potato peelings. Fresh vegetables direct from the garden in small amounts are permissible but should be limited to a dessert spoonful daily per hen to prevent loose droppings.

Should I feed my hens mealworms?

Let us start by confirming the obvious – hens LOVE mealworms! They are to chickens what chocolate is to humans. However, there is much misinformation surrounding the dos and don’ts of feeding mealworms and below we present the facts.

In 2014 Defra announced a ban on the feeding of mealworms to chickens.

The ban is still not widely known by many poultry keepers. It can even cause confusion among those who do know about the ban, but do not understand the rationale behind it.

To put it simply most mealworms are imported and may have come into contact with, or been fed, animal protein which could then potentially pass on disease.

To provide context, the definition of products potentially containing animal proteins was redefined following the BSE epidemic in the 1980s and the foot and mouth outbreak of the early 2000s.

Importing mealworms which have not been inspected and certified means there is no way of knowing if they have been ingesting animal proteins or not. Here is the exact wording taken from Defra’s website:

Dried aquatic inverterbrates can only be used in farm animal feed (for non-ruminants) if they come from an approved ABP premises (or non-EU equivalent) – then they’re considered fishmeal.

We are duty-bound to provide you with the most current, up-to-date information so you can make informed decisions when it comes to your own hens.

Defra says it is currently ‘in discussion with the EU and other Member States with regard to relaxing the current tight ban on the use of insect proteins as feed for farm animals, but only once the risks have been fully considered, and providing safeguards to public and animal health are ensured.’

So please remember that, for now, it remains illegal to feed dried mealworms to chickens.