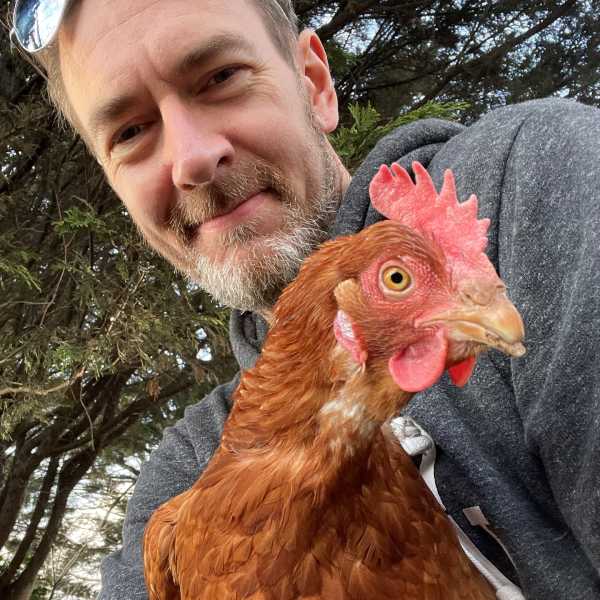 Adopted hen Lauren stars in fundraising campaign to help others

When Lauren the hen was first adopted by the Wickhams, she was struggling to stand and had a suspected fractured leg.

Ben, who volunteers for the British Hen Welfare Trust (BHWT), said, “We’ve been adopting hens for a few years and always look out for the ones who are a little bit poorly.

“Out of a group of around 200 hens, I could see her just sitting down and not moving much. Every time I picked her up and put her back down, she would collapse onto the floor again.

“We knew that we had to take her home.”

A vet confirmed Lauren had a broken leg. She spent the next two months living inside with Ben and his wife Michelle, who showered her with love and TLC, and worked hard to build her strength back up.

Now, she may still have a limp but she’s also a much-loved family pet and one of the stars of the BHWT’s Sponsor a Hen fundraising campaign.

Lauren is one of six hens who were saved from slaughter by the BHWT and are now available to be sponsored.

Sponsoring a hen not only gives you a virtual way to care for a hen yourself if you’re unable to adopt, but also raises vital funds that help the BHWT to continue saving more than 50,000 hens from slaughter every year.

Ben, of Walthamstow, added, “When Lauren was living inside with us, we were working from home and as she got more mobile, she would make regular appearances alongside on video calls, just like other people’s pet cats and dogs, and interrupt by squawking out.

“Keeping hens has genuinely transformed my life and I love that by being available for sponsorship and telling her story, Lauren is now helping others who are in the same situation she was.”

You can sponsor a hen for yourself or as a gift for someone else at: https://www.bhwt.org.uk/get-involved/sponsor-a-hen/