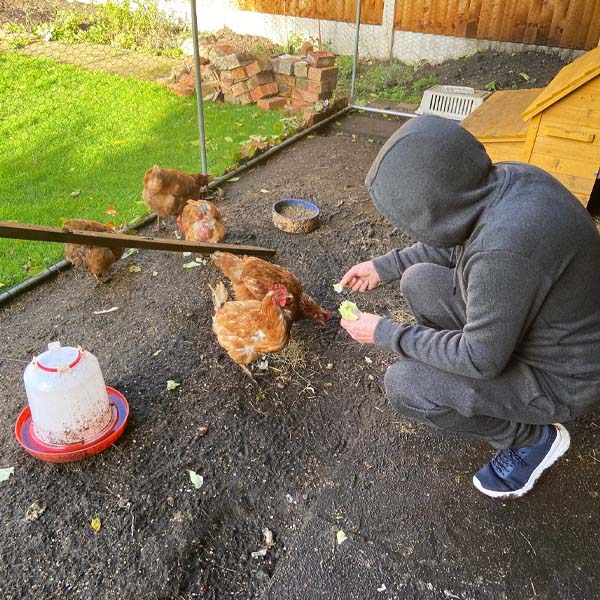 A Nottingham probation hostel is helping its residents’ wellbeing and enhancing their relationships with staff after adopting a flock of ex-commercial chickens.

Southwell Hostel adopted six laying hens, who would otherwise have been sent to slaughter, from the British Hen Welfare Trust.

The feathery friends are part of an Enabling Environment project at the hostel which already includes gardening, growing vegetables, and looking after fish, to help give the residents responsibility and focus.

Adopting the hens was the idea of Pete Lister, Residential Support Officer at the hostel, who has ducks and knows how beneficial caring for birds can be for humans. He says the rescued hens are already having a positive effect on residents’ wellbeing and behaviour.

Pete adds, “I thought as the chickens settle in that eventually we can use them almost as therapy animals.

“They give the residents something to look after and take responsibility for; they feed them, let them in and out of the coop. They’re also providing common ground between everybody and helping residents to show empathy, so they’re improving relationships and bringing people together.”

One resident, Henry, agreed that the chickens have helped him to open up. He said, “I enjoy spending time with them without feeling judged because my mental health hasn’t been good lately. It’s helped me to talk more to the staff as well and I think it would be good if other places do this kind of thing because it really helps.”

John, a resident who leads the responsibility for caring for the flock, said, “Looking after the chickens helps you to forget what’s going wrong with your life and gives you something to look forward to. It’s nice to go out in the morning to set everything up and feed them, they go crazy whenever we have a treat for them, like lettuce.

“I think it’s an excellent idea for places like this to have chickens, they don’t take much looking after.”

Despite no longer being viable in a commercial sense, adopted hens will continue laying eggs for a long time in their new home. The hostel’s residents are using the eggs in their daily meals and during special events such as group brunches or baking days.

Pete adds, “Since the day we got them, the chickens have had a massive impact. It’s been fantastic for the residents’ well-being.

“We wanted to rehome ex-commercial hens because we thought we would be giving them a second chance. A bit like the residents themselves, the chickens have now got a second chance at life.”

The BHWT holds regular rehoming events in Nottingham. If you’d like to adopt some hens and give them a new life, visit our adoption pages.