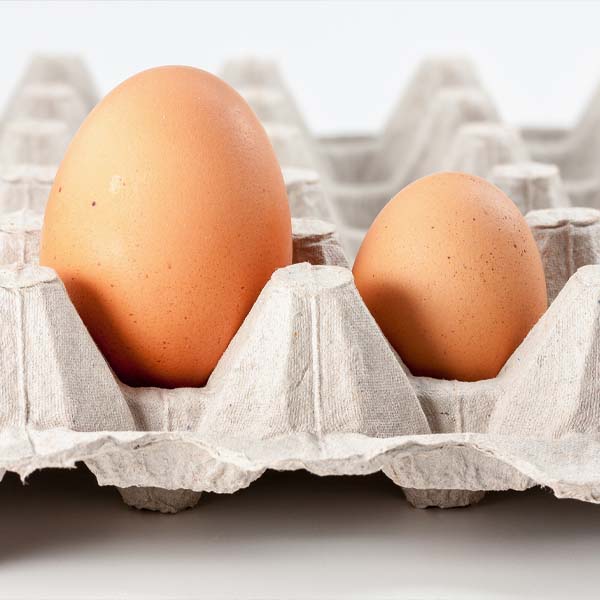 Early in 2021, the British Hen Welfare Trust founder Jane Howorth MBE gave a speech about egg size to a gathering of food writers.

That was the start of a new campaign aimed at benefitting farmers, hens and consumers that has grown from strength to strength.

The Size Matters campaign encourages people to switch from large eggs, which can cause birds increasing welfare issues, such as prolapsing and keel bone breakage, to mixed weight or small eggs.

Making this switch will take the pressure off hardworking hens and allow them to do what comes naturally, without interference from genetic modification.

It’s also better for the farmers, who receive a fairer price for each egg laid, regardless of size, and consumers, as small and mixed weight eggs provider a bigger yolk (arguably the best bit) to white ratio.

Recent research done by a vocal supporter of the campaign, Orlando Murrin, President of the Guild of Food Writers whose passion for this issue was sparked by Jane’s speech, also suggests smaller eggs are better value for the consumer.

His analysis of supermarket prices suggests that mixed-weight eggs in Sainsburys and Waitrose were cheaper per egg and per 100g of egg compared to large eggs.

As a respected and well-known voice in the culinary world, Orlando has been galvanising support for the campaign in many ways including discussing it in radio interviews, online and in his new recipe book Two’s Company; a recent post on Facebook on this subject received more than 18 thousand shares.

Even though I analysed only a small sample, large eggs are coming out more expensive weight for weight than mixed or medium, which didn’t used to be the case – as well as being more expensive per egg (which you’d expect).

My angle on this whole campaign is that food writers have been (inadvertently) misinforming home cooks for years, and it has become ’normal’ for people to think of large eggs as somehow better. “I am doing my best to make amends now. The change to medium or mixed is absolutely effortless, and no need for people to panic that the recipe won’t work.

Other support for the campaign has included:

Jane says, “It has been wonderful to see so many people supporting the use of small and mixed weight eggs. This really is the best solution for hens and farmers alike, and we will keep building on the momentum we’ve gained so far to create long-lasting, meaningful changes in the way consumers perceive and value the eggs they buy.

“As with many welfare issues, the ultimate influence comes from the public and the power we hold as consumers – shopping habits can really drive change.

“I hope this message will encourage people to think about whether they really need large eggs and to consider how much good they could do simply by switching to small or mixed weight.”

The BHWT saves more than 60,000 hens from slaughter and rehomes them as family pets every year and has saved over 860,000 hens since it was established in 2005.