Hens are social animals and like to be part of a flock. Within just a few days of meeting each other, they will form a pecking order that is ranked in terms of dominance and it’s perfectly normal to have lower ranking hens that might get bossed about a bit by those at the top. As long as each hen is able to enjoy pecking, scratching and spreading her wings in peace, your girls should live together happily.

Occasionally, two equally dominant birds may compete for the role of ‘top hen’ and this can result in sustained fighting where both birds spar and peck quite viciously. In such cases, allow the sparring to continue for a few minutes as often one bird will surrender, run away and accept her lower rank.

However, if the fighting continues it will be important to intervene to prevent harm or injury. Use distraction tactics to separate them; whistling, hand clapping, physically picking them up and placing them well apart. Put Vaseline on their combs to help stop aggressive beaks causing damage to vulnerable birds.

As long as the hens have enough space, feed and water these squabbles should stop after a couple of days or a few weeks at most.

Sometimes, especially where space is limited, one bird can appear to be a relentless bully. If lower ranking hens cannot get out of her way, the bully will constantly exert her authority by pecking and chasing other birds, over and over again. 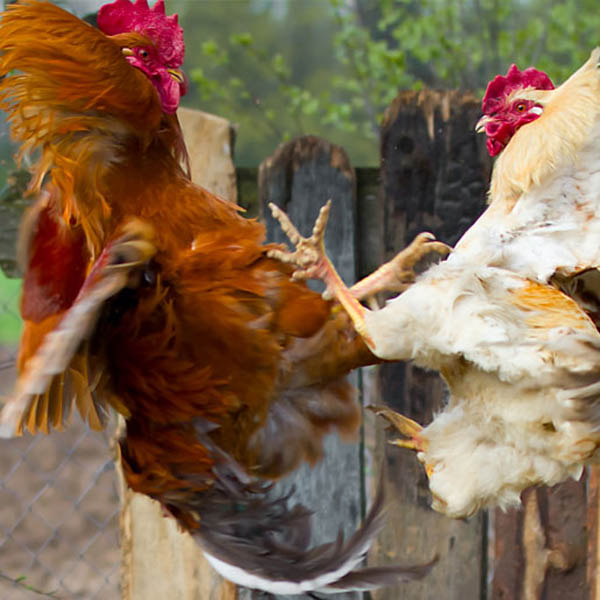 You can try to avoid this by giving the hens more space. Provided the environment is fenced and safe from predators, let the hens free-range. This will provide distraction and stimulation allowing the pecking order to become settled more quickly.

If the bullying is so persistent that blood is drawn or the low ranking hen is miserable, remove the bully from the group for a day to allow the rest of the flock some peace. It is always tempting to remove the victim for some TLC, but she will only have to be re-introduced at some point so keep her within the flock (unless for short periods). Penning the bully separately with food and water for a short while may reduce her confidence and lessen her dominance. Click here for more information on merging and establishing a new flock.

If the low ranking hen is particularly vulnerable (feather bare or with a nervous disposition) and you don’t have space to separate the bully, take her out 3-4 times each day to allow her to eat and drink on her own for about 15 minutes so she can build both strength and confidence. She will quickly learn you are her ally and enjoy the contact. Use Vaseline on her comb and replenish regularly. Progress the merge by encouraging her to feed with the other birds, but stay close to give her reassurance you are there to help if she needs it (you’ll be amazed how quickly they gain confidence in your presence).

In any coop, extra environmental enrichment helps establish peace; pieces of cabbage, cobs of sweetcorn or even shiny CDs hung at hen head height give them a distraction and something to peck at.

It is worth noting that independent trials have shown the use of Natural Free Range Layers Crumble and Pellets will calm and help to merge new flocks.